Hubbard Hall is thrilled to present five free outdoor concerts on our great lawn behind Hubbard Hall. Audiences are invited to bring their own blankets and chairs and enjoy a relaxing evening listening to some great music and musicians from near and far!  Audiences may arrive any time after 5pm for a 6pm concert start. Maximum 100 attendees allowed on the lawn. In case of rain, concerts will be performed inside Hubbard Hall for a maximum of 45 audience members. No reservations. First come, first sit. Masks required for those unvaccinated. 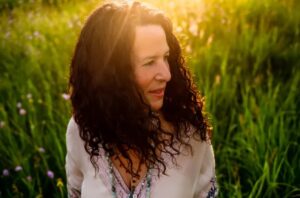 Something happens when Athena belts out her original, soulful, deeply moving tunes. Everyone present is transformed. I’ve never witnessed anything like it. – Barbara Huson-Author of Sacred Success

Cambridge’s own Athena Burke is excited to kick off the Saturday night concert series on the Great Lawn of Hubbard Hall. She’ll perform her shimmering and earthy original music including selections from her forthcoming release God Is Here featuring the single “I Will Not Fall,” an emotional power anthem she wrote to help heal a past filled with trauma and as a call to our inner strength in times of challenge.  “We can all use a celebration right about now as we all emerge from this challenging time and I can’t wait to perform for you.” 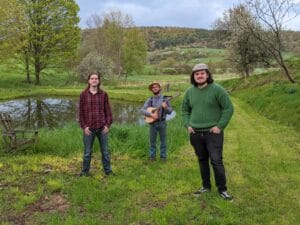 The Men o’ War Balladeers return to Hubbard Hall for a free outdoor concert, 6pm Saturday, July 31st. The traditional music band and vocal group is based in Cambridge, NY, and sings traditional North American and Celtic ballads and sea shanties. They perform with a vocals-focused, harmony-rich style, either unaccompanied or sensitively backed by acoustic guitar, Irish bouzouki, or concertina. Formed in 2016, the band has recorded and self-produced two full length studio albums: “Rise with the Moon” (2017); and “Low Lie the Fields” (2019), and one EP: “Live at Hubbard Hall!” (2017).

Village Harmony ensembles never fail to thrill their audiences with their powerful and heartfelt singing and joyous presentation. The select ensemble of ten talented singers and instrumentalists from five states is led by Village Harmony founder and director Larry Gordon, assisted by Avery Book and Sinead O’Mahoney. Village Harmony, a non-profit, umbrella organization based in Vermont, promotes the study and performance of ethnic singing traditions from around the world.  For more than thirty years, they have organized teen ensembles each summer in New England and ensembles for mixed-age and adult singers in numerous foreign countries.

The concert program features a remarkable variety of music world harmony singing traditions:  South African songs and dances, traditional songs from Caucasus Georgia, Corsica, and the Balkans, American shape-note songs and songs of social struggle, and a set of renaissance pieces.  Some numbers are accompanied by a band of fiddles, accordion and percussion.

About Barry Oreck and Friends
https://barryoreckmusic.com/

The Hubbard Hall concert serves as the CD Release Party for We Fit Together (released in the midst of the pandemic and making it to #9 on the folk charts in May 2020) and a preview of an upcoming record featuring new songs written during the tumultuous last year and a half. The band is thrilled to celebrate their first concert back and to do it here in the North Country. 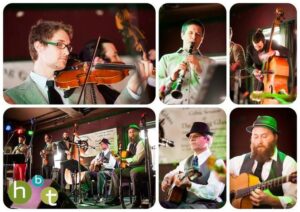 Hot Club of Saratoga, upstate New York’s premier gypsy swing collective, plays a repertoire that reflects the spirit and style originated by Django Reinhardt and Stephane Grappelli in The Quintet of the Hot Club of France most prominent in the 1930’s and kept alive through a long line of gypsy jazz artists since that time. Most of the tunes we play were either written by, or recorded by, Django at some time in his all too brief musical life.

Though Django is most closely associated with the quintet and with Stephane Grappelli on violin providing the other solo texture, he recorded in various other configurations. He often recorded with a clarinetist in place of Grappelli and his violin, as well as other instrumentals, with  big bands, and with on some occasions with small combos with drums as he began to explore amplification and more bebop stylings.

The instrumentation of the full quintet of the Hot Club of Saratoga, solo and rhythm guitars, string bass, violin, and clarinet/sax, allows us to explore this style throughout the range of its roots. Since forming in early 2013, Hot Club of Saratoga has brought the hot swing sound to coffee houses, restaurants, bars, clubs, swing dances, festivals, weddings, and numerous private parties. If you’re looking for gypsy swing true to its origins while subtly expanding the genre, music that just makes you smile and move, give us a listen.