There will be no Hip Hop & Jazz or Modern Jazz dance classes with Heidi Knecht-Seegers on Monday September 21. The next rehearsals will be on Monday 9/28.

We’re sorry, due to a major power outage in Albany our phone system was down for part of the afternoon.  We are happy to report that service has been restored. Thank you for your patience.

By Kyra Fitzgerald Cancellations, Uncategorized
Wednesday Morning CONTINUING YOGA with Zaidee will be canceled on Wednesday, August 26. A makeup class will be held on September 2, 7:30 am.
Love0 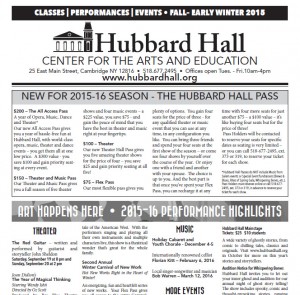 Get the scoop on all the happenings! Fall classes start September 9 and the term runs through January 2016.

If you live in Cambridge, Greenwich, Salem, Eagle Bridge or Hoosick Falls…look for your printed catalog in your mailbox as a FREE PRESS insert!  Or pick one up here at Hubbard Hall or in one of your favorite local businesses…

While in late July and early August much summer time cultural activity centers on Saratoga, the Route 22 spine through Washington County from Cambridge to Salem is also a modest locus of entertainment activity as well.

Upcoming in the next few weeks are a host of events offering music, theater and the visual arts.

For instance, while “Love’s Labour’s Lost” is the ongoing (through Aug. 2) by Saratoga Shakespeare Company at Congress Park, the same Shakespeare play is also the summer presentation of a touring company assembled for decades by the Cambridge-based Theater Company at Hubbard Hall. It hits the road for free performances on public commons, cultural centers and other outdoor spaces throughout the area beginning in mid-July.

The Hubbard Hall Summer Shakespeare productions, in this case of the comic romance involving a quartet of young men driven off their vow of determination to hit the books by the arrival of a foursome of young ladies – which, unlike the Edwardian version staged in Saratoga, is set during New York Fashion Week in the 1980s – are generally offered in a compressed presentation designed to kick off by 7 p.m. and be completed before dusk.

Following a weekend of performances on the Cambridge Community Gardens lawn, and earlier stops this week in Troy and Salem, there is an alfresco performance of “Love’s Labour’s Lost” today at The Georgi Museum, a fine arts gallery space on the banks of the Battenkill on Adams Lane in Shushan, and tomorrow at the Southern Vermont Arts Center in Manchester, Vermont; Saturday at the Hoosick Falls Common; and Sunday at the Greenwich Commons.

While the Shakespeare troupe is on the road, the Hubbard Hall Children’s Theater will mark its thirtieth anniversary this weekend on their home stage in Cambridge. To celebrate the 30th Anniversary, the company revives its very first production, a collaboration of children’s author-illustrator Maurice Sendak and songsmith Carole King adapting the children’s classic “Really Rosie.” Performances are Friday and Saturday at 7, with an additional matinee performance Saturday at 2.

Hubbard Hall is also home at this time of year to Music From Salem, a formerly outdoor classical series already in progress this summer. After the children’s theater production this week, the concert series resumes the following Sunday, Aug. 2, at 4 p.m. with a concert titled “Czech List.” It tackles a pair of works by Czech composers, Antonin Dvorak’s “Piano Quartet in D major, Opus 23” and Bohuslav Martinu’s “Piano Quintet No. 2”.

The final Music From Salem concert of the season comes the following Saturday, Aug. 8, at 8 p.m.

For information on “Rosie” and Music From Salem performances, contact the Hubbard Hall box office at 677-2495 or visit www.hubbardhall.org.

Up Route 22 in the actual Salem, music of a different genre is the subject of two weekends of cabaret beginning tomorrow night at the Fort Salem Theater featuring The Singing Anchors – Channel 13 personalities Benita Zahn and Jessica Layton and former Channel 6 anchor Jerry Gretzinger, Their popular musical revues a staple at the church-turned-summer-stock-venue, and for this production, “From San Jose to Broadway and Bacharach.” Fort Salem executive producer Jay Kerr, who provides piano accompaniment, have assembled a tribute to the late singer-songwriter Burt Bacharach, sampling some of his pop ouevre, his several Broadway scores including “Promises, Promises”, and some more recent material.

For information on this and the remainder of the Fort Salem summer schedule, call the box office at 854-9200, or visit www.fortsalemtheater.com.

Also in Salem is a unique cultural space called Salem Art Works (SAW), a former dairy farm that plays host of occasional music and other performances. It serves as a place for visual-arts workshops from welding to painting, and presentations, including an on-campus sculpture park.

Kicking off Sunday is an annual exchange with artists in Salem’s sister city in Germany of the same name, a three-week residency and workshop program called Salem2Salem.

“There’s no strict method or politics to who can participate,” says SAW founder Anthony Cafritz explaining the mix of performance, installation, painting, sculptural and musical artists who participate in this biennial event. It culminates Aug. 15 with a public dinner and exhibition of works completed during the residency, and, says Cafritz, “after dinner, there may be readings or performances of something just completed during the residency.

For information on SAW, located at 19 Cary Lane in Salem, and its programs, including Salem2Salem, call 854-7674 or visit www.salemartworks.com.

Look for it soon as an insert in your local Free Press newspaper or on news stands throughout the region.

Ring in 2015 by treating yourself (or a loved one) to learning, inspiration, creativity and good health through the arts!  Check out all the offerings in our Late Winter & Spring 2015 class catalog.  You’ll find dance, yoga, tai ji, karate, foil fencing, visual arts and more for all ages and abilities, all right here in your community.

Hubbard Hall for All

Hubbard Hall for All

Hubbard Hall strives to enrich the lives of individuals and communities, and offer valuable pathways to learning through the arts. To that end, with the 2014-2015 season, Hubbard Hall launches our new Hubbard Hall for All program. In collaboration with individual donors and funders, Hubbard Hall for All will guarantee that all of our main stage productions are available and accessible for all community members. Hubbard Hall for All provides free tickets to those who serve our community each day, including: Military personnel and their families, Veterans, EMS workers, the Farming Community, Fire and Rescue, Police and the Special Needs Community. Through the generous sponsorships of local individuals and businesses, we are able to offer these tickets at no charge to qualifying individuals.  Call 518-677-2495 for more information on how to secure tickets.

(Hubbard Hall for All tickets will not be available at the door prior to a performance. You must arrange for tickets in advance by calling 518-677-2495.)

Hubbard Hall is an arts and education center supporting creativity and inviting participation to make art and community happen.